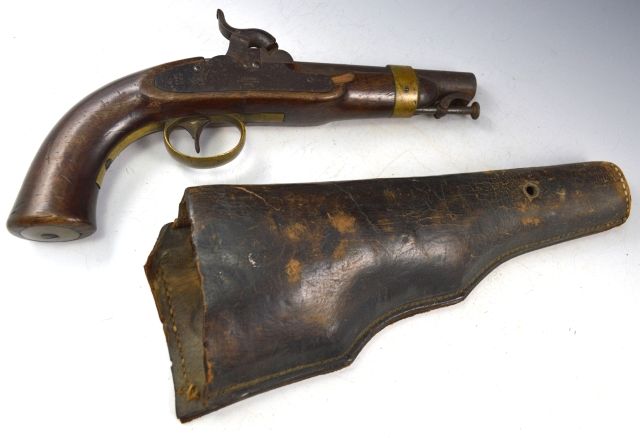 His sidearm is the Model 1842 Navy .54 caliber smooth bore pistol manufactured by N. P. Ames Springfield Massachusetts and dated 1845. With the pistol is its period holster that likely was part of a set of saddle holsters and appears to have been modified for wear on a belt. This pistol would have been either an early war private purchase or an issue firearm during his initial enlistment.

His sword is a Federal Period saber of large proportions with a very unusual blade having an Hussar style extra wide false edge tip. The blade is engraved Warranted at the ricasso and decorated with blued and gilt military motifs with a beautifully rendered U.S. Federal style eagle.

Col. Broadfoot’s CDV image shows him in civilian attire. These weapons and photograph had been preserved and handed down through his family until acquired by me.

Charles Wetmore Broadfoot commanded the 1st North Carolina Junior Reserves at the Battle of Bentonville(March 19?€”21, 1865) …”It looked like a picture and at our distance was truly beautiful … But it was a painful sight to see how close their battle flags were together, regiments being scarcely larger than companies and a division not much larger than a regiment should be.” Col. Charles W. Broadfoot, 1st North Carolina Junior Reserves, describing the attack by the Army of Tennessee