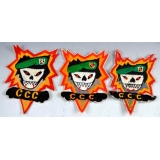 SGT Major Joseph was born in Bayonne, New Jersey on November 28, 1921. As a young man he enlisted in the Civilian Conservation Corps (CCC) and worked in Montana and other western states. At the onset of World War II, he enlisted in the U.S. Armyas an infantryman and was assigned to the 1st Infantry Division. After participating in the D-Day invasion, his unit traveled to southern Germany where he met his future wife, Helen. After rotating back to the U.S., he was instrumental in forming the Special Forces unit Green Berets, where he served as Command Sergeant Major in the 1st, 5th, 7th and 10th Special Forces Groups. He served 3 tours in Vietnam and numerous countries. He retired to Fayetteville, NC after 30 years of military service and worked with the U.S. Postal Service for an additional 15 years as a mail carrier at Ft. Bragg, NC.-
(SGM Stephen Joseph CCC MACV-SOG RVN Sog Knife, Beret, SF/SOG Grouping)