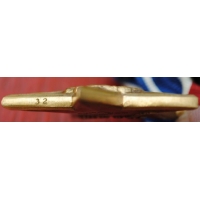 (Second award) For gallantry in action in pursuit of superior forces of the enemy under the insurgent General Tinio, in Northern Luzon, PI, December 4-18,1899, through a most dangerous and difficult country, through hardships and exposure, thereby forcing the enemy to liberate 22 American prisoners held by them, December 18,1899.