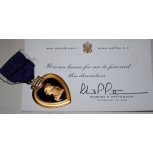 WWII US Army Air Force P-51 Pilot Lt. McDonald Godfrey Purple Heart & Air Medal and B-10 Flight Jacket POW Grouping…His German POW ID card and issued Purple Heart and Air Medal each named on the iwc replica watches reverse-Note the name is reveversed on his purple heart medal…Photo shows Lt. Godfrey in his P-51 Mustang named Candy Lamb…His POW ID card shows him wearing his B-10 Flight Jacket which was with him throughout the war as evidenced by the heavy wear visible in the photos here…Of particular interest are the interior pockets which he added to store items while a Prisoner of War.
Lt. Godfrey entered Army Air Corps service in 1942 and transferred to England in March 1944… Lt. Godfrey served with the 352nd and 328th Fighter Groups in Bodney, England with his first mission on 4/26/44 as a dive bombing escort…Aon D-Day he flew 10 hours of dive bombing followed by Bomber escort flights to Berlin, Paris, Reimes, England and various German cities until his last mission on July 31 1944…
On 7/31/44 after an evening of poker and beer Lt. Godfrey was a last minute substitute pilot on a bomber escort mission…On the flight his aircraft caught fire and he bailed out near Baugge, Belgium…Captured by the Civil Police he was turned over to the Germans and admitted to a German hospital for treatment of severe burns to his face, hands and feet…On his release from the hospital he was sent to Frankfurt, Germany then on 8/26/44 sent to Stalag 3 in Saegan, Poland as POW #1894…He survived the imprisonment and in January 1945 he was force marched with the rest of the camp to Mooseburg, Germany…Many men died due to starvation and exposure on the march…Lt. Godfrey was liberated in May 1945 and transferred to a hospital in France prior to returning home to the United States.
(WWII USAAF P-51 Pilot Lt. McDonald Godfrey Purple Heart & Air Medal)